My story and experience

I grew up in Kolkata, West Bengal, though I was born in Tiruchirapally (Trichy), Tamil Nadu and completed my school and college/university studies in Kolkata. I lived there for 22 years and to me, Kolkata is the best place on earth. I feel very proud that I grew up there. The Bengali people are the most wonderful, kind, friendly and passionate people I have met and place a high value on culture, music and freedom of expression. Their patriotism and love for India and Indian culture is fantastic. Even today, West Bengal is one place where you will find women proudly wearing Sarees and the prints are so colourful and eye-catching ! Bengalis place a great value on human life, dignity, independence and culture and I feel quite proud that I grew up in the home of Ramakrishna Paramahamsa, Swami Vivekanand, Netaji and Tagore...to mention a few.

One of the best things that I grew up with is the celebration of the magnificient Durga Puja - a celebration of 4 days, where the entire city is bedazzled and lit up and becomes a wondrous "Maya" city ! We used to walk from "pandal" to "pandal" (it is a temporary but amazing structure made of bamboos and wrapped with intricatedly stiched cloth to create appearances of a temple, palace etc. It is to be seen to be believed)and look upon with wonder at the beautiful goddess and then enjoy the snacks from the roadside vendors. The enjoyment that "puchka" (golgappa, pani puri), alu-dum, ghooghni, churmur etc. and the fizz and sting on the tongue is still fresh in my memory.

But it was Durga Devi's face that I found most fascinating and beautiful to watch. I used to spend hours watching the images and they are etched in my memory. I do not think that there is a face more beautiful than that of Durga Devi in the world. Even as a child, I had made up my mind that if I had a daughter, she would be named Durga and that came true as I resisted all attempts from relatives to name our daugther after our grandmothers of earlier generations and firmly insisted that Durga would be the name ! If you do not agree with my comment after looking at the images posted above, please let me know. And it was the ferocious image that used to captivate me rather than the peaceful one and hence I have chosen to display the beautifully angry face as the first one in the gallery above. 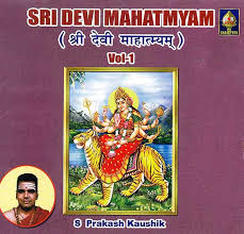 I did not know any mantras when I came to Canada in 2001. However, there was always a fascination with the various sounds of the Tantric mantras and an intense desire to perform "Chandi Homam" though I did not know that it was Devi Mahatmyam that was chanted (with a swaha for each shloka/line ending with a full stop or "poorna-viram") for the same !! I stumbled upon Shri Prakash Kaushik's rendition and was captivated by the strength and depth of his voice ! And I used to practise along with Shri Prakash Kaushik. My practice sessions for Devi Mahatmyam gained a new momentum and became more purposeful. By listening to Shri Prakash Kaushik with strong determination and with Durga Devi's grace, I gained fluency within 1 month. 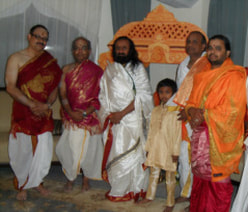 Shri Chandru Gurukkal ﻿(http://www.sivatemple.ca),﻿ an accomplished Shivachariyar and an adept at Chandi Homam (I have written about him at length in the Mahanyasam webpage), then offered me several opportunities to lead the chanting at the Chandi Homams he performed at his temple and at the "Art of Living"Centre in Montreal (of the Sri Sri Ravishankar fame) and at other places, which did my confidence a world of good.

In 2008, ﻿﻿Smt R﻿﻿ama Subramaniam of the ﻿Sringeri Vidya Bharati Foundation (SVBF)﻿fame in Canada, invited me and my wife Sridevi Gayathri to chant Devi Mahatmyam at their home. Soon after, Rama Subramaniam  suggested that I start teaching the same to community members and I was greatly reluctant as I thought I was not qualified in any way to do so. However, she continued insisting and I gave in with some nervousness. The class started with 30 students and I expected it to drop after the first class. Imagine my shock when it started growing in numbers with every class ! Today, 4 batches of students have completed their learning (2008,2013) and close to 100 individuals know how to chant Devi Mahatmyam. It was a very humbling and heart-warming sight to see them chant along with the Sringeri priests at the SVBF kumbabisekham where Chandi Homam was the main religious event.

Note:  Our unconditional apologies in advance for any errors in chanting. This is a humble amateur effort.